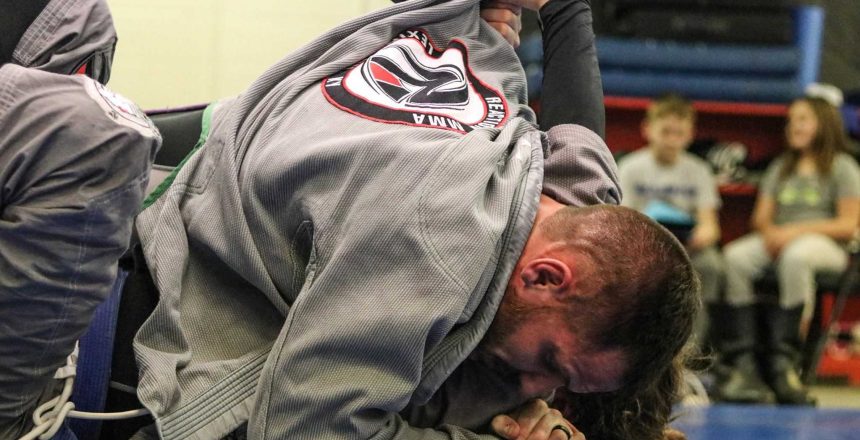 What is Brazilian Jiu Jitsu?

What is Brazilian Jiu Jitsu?​

Brazilian Jiu-Jitsu is a martial art and combat sport system that focuses on grappling with particular emphasis on ground fighting. Brazilian Jiu-Jitsu was formed from Kodokan Judo ground fighting (newaza) fundamentals that were taught by a number of Japanese individuals including Takeo Iano, Mitsuyo Maeda, Soshihiro Satake, and Isao Okano. Brazilian Jiu-Jitsu eventually came to be its own combat sport when mainstream Judo grew towards becoming an Olympic sport; as well as through the innovations, practices, and adaptation of Judo, Jujutsu and Wrestling through Carlos and Hélio Gracie (who passed their knowledge on to their extended family) as well as other instructors (who were likely students of the Judoka Maeda, such as Luiz França, and their later successors in Brazil and elsewhere).

BJJ is founded on the concept that a smaller, weaker person can successfully defend themselves against a bigger, stronger, heavier opponent. This is done by using technique, leverage, and most notably, taking the fight to the ground, and then applying joint locks and chokeholds to defeat the opponent. BJJ training can be used for sport grappling tournaments and in self-defense situations. Sparring (commonly referred to as “rolling” within the BJJ community) and live drilling play a major role in training.

Since its inception in 1882, its parent art of judo was separated from older systems of Japanese Jujutsu by an important difference that was passed on to Brazilian Jiu-Jitsu. It is not solely a martial art; it is also a sport, a method for promoting physical fitness and building character in young people, and ultimately a way of life.

Anyone who is intellectually honest knows that Brazilian Jiu Jitsu is an elite martial art in that one needs to have at the very least a cursory understanding- if not a mastery of – to be a complete martial artist and/or fighter. How does it compare to other popular traditional martial arts out there? Why is BJJ considered such a superior martial art?

Let’s take a look at the comparison between Brazilian Jiu Jitsu and some of the more popular striking arts:

Boxing: Boxing is one of the MOST popular martial arts ever! I say this because when one looks at the prize money available in boxing, it is clear that high level boxers make more money than most other athletes, and undoubtedly more money than any other martial artists. And yes, to quell any confusion, boxing IS a martial art! It’s a system by which one is able to control and potentially inflict harm upon another person and/or protect oneself, ie “Martial Arts”. Brazilian Jiu Jitsu has a substantial edge over boxing in a no holds barred or self defense situation, namely in that BJJ practitioners generally understand how to avoid getting hit, but boxers generally don’t understand how to prevent falling down….absence of the boxing rule set. Taking this into account, while boxers may have superior striking to BJJ practitioners, a high level BJJ practitioner vs. a high level boxer will more often than not win the fight.

Muay Thai: Muay Thai is another elite martial art, and if a BJJ Practitioner clinches (a fancy word for “grabs”) with a Muay Thai fighter and lets the striker start to throw knees it may be a bad time for the BJJ guy/gal. Again the rule set of Muay Thai makes it so that a Muay Thai fighter with no grappling/BJJ knowledge won’t be able to stay in the fight very long.

Taekwondo: perhaps the most popular and most derided Asian martial art, TKD has become a sort of a joke in that it is, on a fundamental level, simply tag played with ones feet. Brazilian Jiu Jitsu is superior to Taekwondo because, simply put there is no distance management taught in most standard Taekwondo curriculums making it, on a fundamental level, ineffective…especially when someone that know what they are doing grabs you.

Now, let’s take a look at Brazilian Jiu Jitsu in comparison with some of the more popular grappling arts:

Wrestling: Like boxing, wrestling isn’t viewed by many as a “martial art”, but it is. In competition, wrestling can act as a sort of “anti jiu jitsu”. A particularly athletic wrestler with strong wrestling technique can negatively effect jiu jitsu and simply smother the BJJ practitioner; many competition oriented jiu jitsu practitioners do not study takedowns on the same level as wrestlers do thus giving wrestlers an inherent advantage. However, freestyle wrestling is far more sportive than jiu jitsu and in a self defense situation jiu jitsu has a significant advantage in its understanding of joint destruction and elimination of consciousness…breaking limbs and choking unconscious. Catch wrestling, however, CAN be effective against BJJ, as we’ve seen from Josh Barnett-who has a black belt in BJJ- and Kazushi Sakuraba, but both of these fighters have thoroughly familiarized themselves with BJJ.

Judo: Judo is the parent sport of Brazilian Jiu Jitsu. If a judoka focuses heavily on their “newaza” (ground techniques) they may be able to develop a comparable skill set to a high level BJJ practitioner. However, due to the rules of competition judo, most Judokas’ Newaza is not on as high of a level as most BJJ practitioners; however their ability to control where a fight or match goes is comparable to that of a wrestler.

Sambo: High level Sambo practitioners can have impressive techniques, but because of Sambo’s rule set, they are often unfamiliar with specific positions and techniques that Brazilian Jiu Jitsu emphasizes. The reality is that Sambo is one of the few styles that can compete against BJJ, similar to Catch Wrestling.

Perhaps the most interesting comparison is between Brazilian Jiu Jitsu and “complete” martial arts, that is to say, martial arts that tout themselves as being systems effective as stand alone items.

Kung Fu: the techniques that Kung Fu relies upon make clinching relatively easy, and once a clinch is obtained, Kung Fu practitioners have a really hard time dealing with attacks available to BJJ practitioners. The few Kung Fu guys we’ve seen in MMA/UFC have not done well at all as a result…

Krav Maga: There is a common misconception that Krav Maga is a complete martial art. …It is not. Krav Maga was never intended to be a complete martial art, but rather a way to prepare 18 year old kids to handle themselves against untrained attackers in uncertain conditions. Pit most Krav Maga practitioners against MMA fighters or even pure jiu jitsu hobbyists and its superficiality becomes apparent. Bear in mind, that superficiality is exactly what makes it effective for what it was designed to do, but that was and has never been addressing trained assailants.

Karate: the vast majority of what is called Karate today is about as effective as interpretive dance. Wide stances, complete lack of takedown defense or awareness of submissions and a general watering down of its belt systems have made Karate kind of hilarious. There are some styles that have proven to be effective, so never assume that someone who does Karate is ineffective, but generalizations can be made.

The various martial arts that are out there tend to not match up very well against Brazilian Jiu Jitsu in the street or in MMA/UFC. The secret to BJJ’s success is its uncompromising nature and efficient use of simple mechanics – because physics. If a technique doesn’t work against a trained opponent, it is deemed ineffective, most other martial arts either limit the scope of resistance or try to circumvent that resistance altogether, BJJ allows us to face adversity with technique and test what TRULY works…and what does not.